Finally after six long weeks, we have new content. Nibbler has finally shown up in New New York. This is a super simple little event. Just run the missions to collect Nibbler disks. 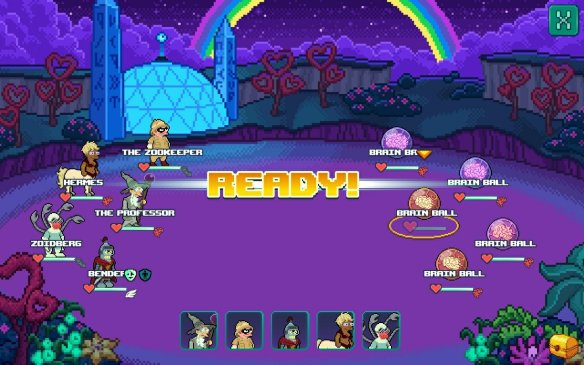 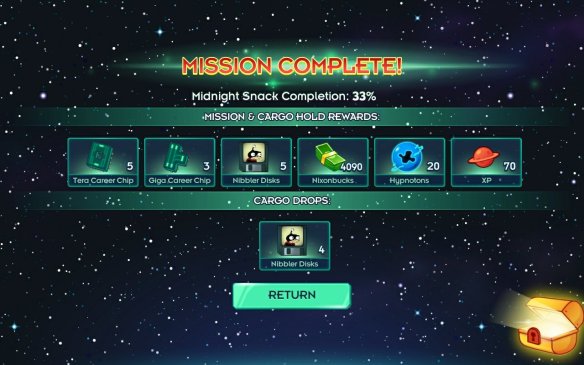 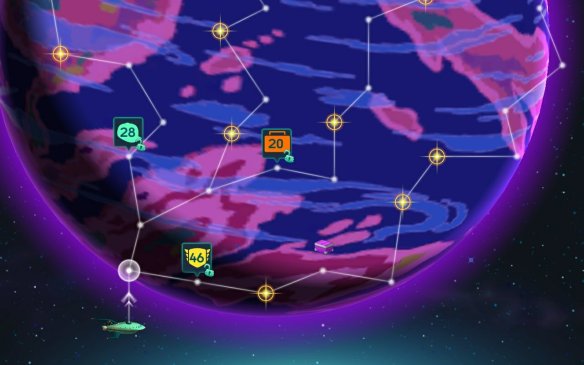 Rewards from the 46 path 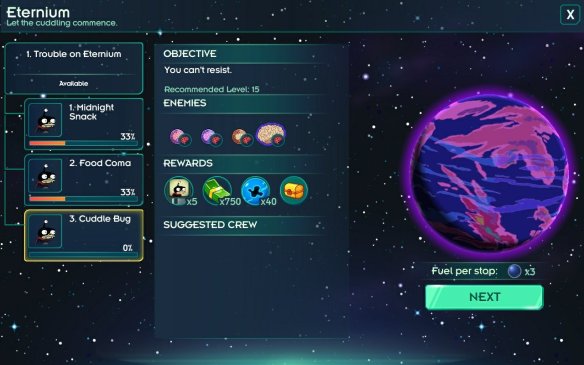 Pizza rewards from the Sticker Book of Fun! 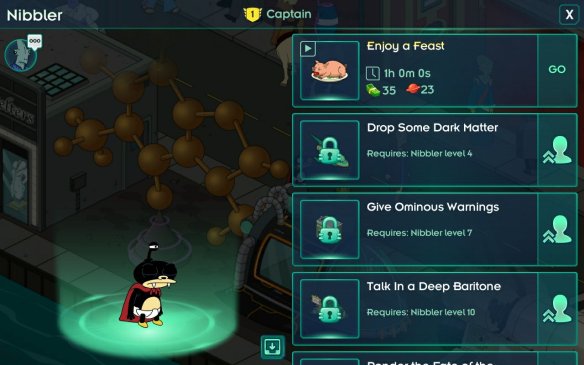 I am happy to finally have Nibbler, but I am thinking this event feels like it was cut out of a much larger event. Nibbler has been in the store list ever since the game began and now we have him. I hope this isn’t just some tidying up before shutting down.

So get Nibbler and get enough disks to promote him up in the future.

What do you think of Nibbler finally showing up? Enjoying some new missions and story?

Well, recently, a Tinyco/Jam City rep on the Reddit page finally posted that the game is not dead, but will be having less events. Next event is scheduled for July.

So work on those regular gameplay things you need to get done while we have this extended break.

Hopefully, they will come back with some less grueling events but lots of stuff I must have in my town.

I am hanging in there so far. How about you? Let me know in the comments below.

So as you are probably aware, and if not, I’ll be giving you some bad news, FWOT is on an indefinite break from new content. Jam City has laid off or moved most of the Devs that worked on FWOT to the Harry Potter Game team.

There has been no official word from any of the devs that were on Reddit or the FWOT Discord channel. The ambassadors, such as Willbits, have not heard anything either, or have permission to share what they know yet.

Wow. Way to treat your customers.

Now, the game is still up and running. You can work on anything you have still going in the game, but it could be turned off tomorrow. We just don’t know.

I have been critical of the game in the past and will be again shortly.

I got this game because I wanted more Futurama stories.

I got this game to see more of my favorite characters.

What I really got was a game that I couldn’t progress unless I bought fuel, so I could run those missions a hundred times for some items that I needed to get the cool piece for my town.

What I really got was a battle simulation and ridiculously expensive items to get the characters, if I wasn’t able to grind the missions a hundred time for some items  I needed…

I wanted more of Fry and Leela. And Bender and…

What I really got was a total grind to level and promote minor characters so I could run the missions to get a couple items needed so I could get a cool piece for my town.

They really didn’t understand the fanbase did they?

I actually spent some money in this game, but I had to let go of many items. There was no way to get everything just by playing or even by spending a moderate amount of money in the game. Even now as I am still—-STILL–unlocking Elzar, I have gotten 5 toques in three weeks. Of course I haven’t been sending them every single 2 hours. I slowed down to a few times a day. But you say life gets busy, I could just pay pizza for the toques or even just Elzar so I can just get on with the game.

But No. One single toque costs 100 pizza. That’s over 3 dollars.  For ONE. And I need like 8 more. and I still need other things to get him. To just buy Elzar outright would cost 1045 pizza. Like 30 bucks. Ridiculous.

Below are some of the reasons why this game did not do well with the fanbase it had already built in.

In conclusion, I will miss my Futurama characters and their cute little animations and my cute little NNY. But I will not miss the actual gameplay, their manipulating money-grubbing ways and grinding grinding grinding. I will continue to play if they somehow revive it.

PS. My website is going to expire at the end of the month. Unless I hear something by then, I will be taking it all down.

Did I miss anything in my list. I bet I did. Let me know in the comments below.

And If I don’t see you all again,

Well, well, well! As you may have noticed, my fellow Earthicans, we are having a little break in the events in our addictive little game.

We now have some time to work on the regular story goals, level up some characters, or even not log in at all.

I hope you do log in some, because the last break we had, I did not. I have regretted that since then. I could have made some progress on some things I needed to do. This time, I am working on getting Elzar and the Decapodian artifact so I can move on to the Uptown district. 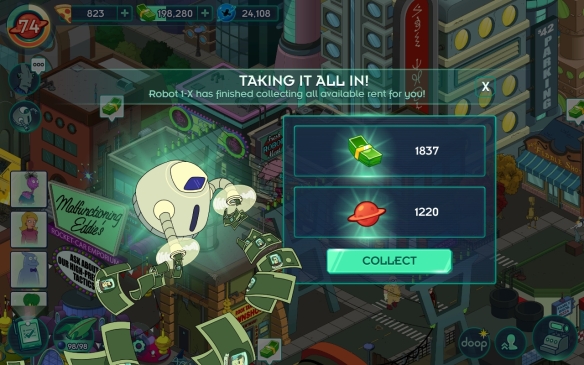 END_OF_DOCUMENT_TOKEN_TO_BE_REPLACED

Week 2 of the Zapp event brings us Linda, Florp the Trisolian comedian, and a yarny ambassador.

Some of the questlines: 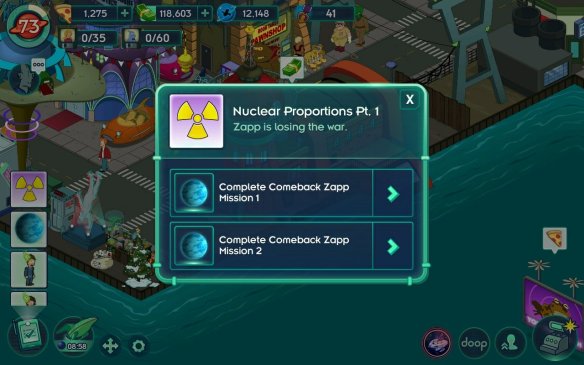 END_OF_DOCUMENT_TOKEN_TO_BE_REPLACED

The Zapp Brannigan event has begun, bringing us Morbo, Admiral Chu, and a velour enrobed outfit for Zapp. 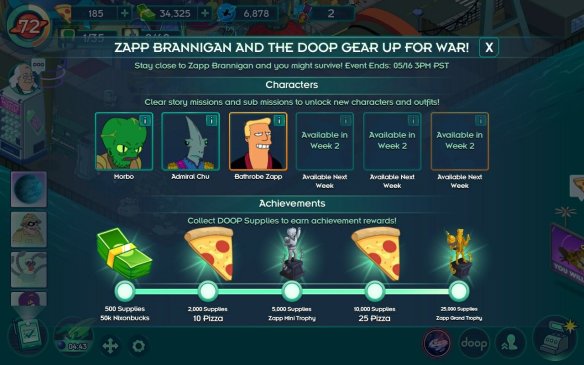 END_OF_DOCUMENT_TOKEN_TO_BE_REPLACED

The newest game update has brought with it some new gameplay features. Namely, difficulty settings for the missions.

This is not available on all missions, just the New Justice Team missions, The Eye of Evil, but will probably be added to other missions in the future.

END_OF_DOCUMENT_TOKEN_TO_BE_REPLACED 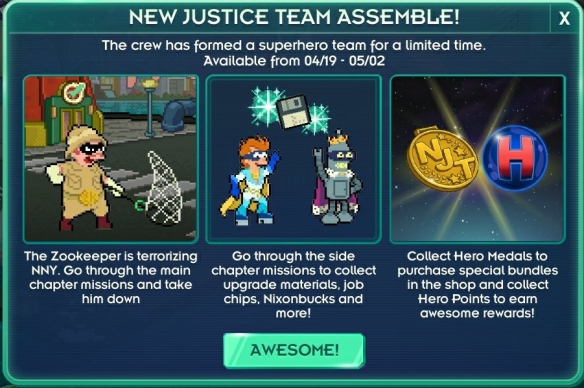 END_OF_DOCUMENT_TOKEN_TO_BE_REPLACED

The Uptown District is here and brings us the regular versions of Walt, Larry and Igner. 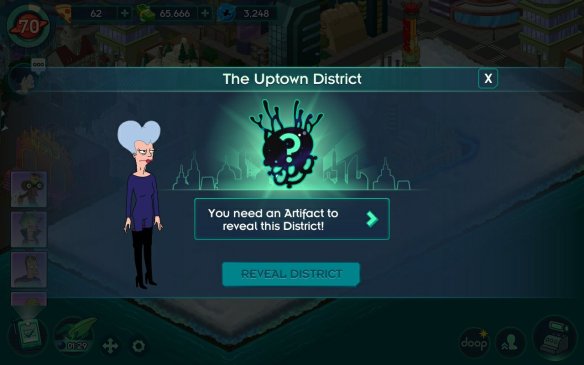