Looks like week 5 is now active in the game. I am still waiting for droppings for Kwanzaabot, but it looks like I do have access to see some of the items in week 5.

PvP rewards were distributed. Here’s mine.

Robot Santa was available right away for 750 Santa Medals.

I have both Robot Santa and Kwanzaabot to unlock.

To unlock Robot Santa you will need 365 Nebula Orbs which are obtained in the Universe Battles/PvP and the questline.

Robot Santa’s Sleigh is available for 150

New Prizes in the Xmas Xchange: 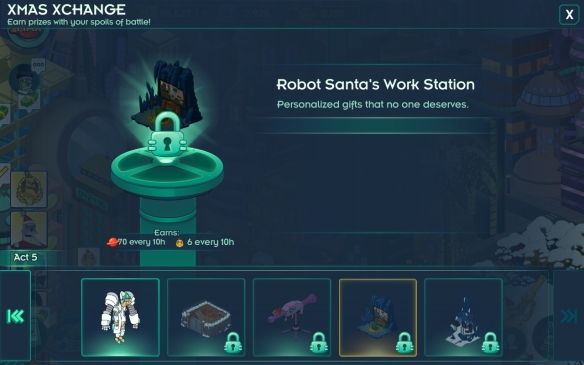 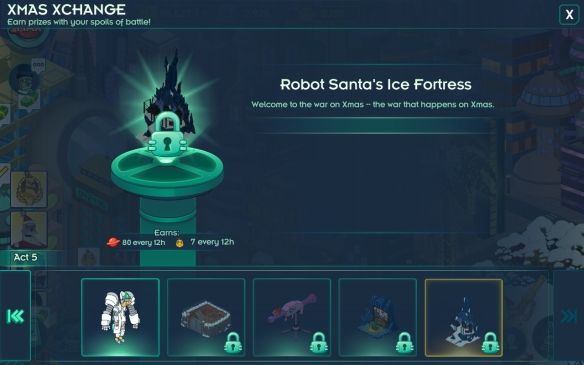 Battle of the Universes has put everyone back at unranked for their tier.

There are new missions on Neptune, but I have no access to them until I finish week 4’s questline.

From reddit, here is the first 2 parts of the week 5 questline.

To All a Good Night – W5 Main quest

Snowmotron is the other character this week. Thanks Reddit FWOT

At least he doesn’t require droppings. 🙂

There are a few new PvP prizes, but there is no way I can get any of them. I’ll have to choose between Robot Santa and these decos.

That’s all I have for now. I’ll update when and if I get to actual week 5.

So how are you guys doing in this event? What week are you stuck in because of horrible drop rates?