As you all are aware, week 5 of Robot Hell on Earth has dropped into our little New New Yorks and has brought the task of fighting the Robot Devil.

Now it looks really complicated and hard, but it isn’t. If you have leveled up some of your characters that you have gotten in this event, you will do just fine.

My preferred crew is:

The last two slots can be any of your leveled up Robot Hell characters.

Use Fry’s special attack to up your crews damage and Roberto to drop the defenses of the enemy. Fry’s will last the whole battle, but each new enemy conjured by the Devil on his turn will need Roberto to do it again. Use the Gypsy to up your crews health so they don’t die, duh. Billionairebot and URL are there for their health meter.

Attack the three minions and keep attacking only them. 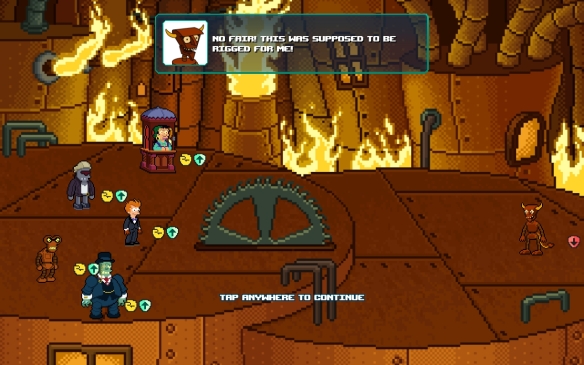 Every time the Robot Devil has a turn, he will conjure another minion.

Eventually, and it really doesn’t take that long, you will chip away at the Robot Devil’s health meter until he is defeated.

Woo hoo! He’s toast. But there is a glitch with the reward box.

It shows nothing was awarded. Boo!

But once you get back to New New York the rewards should pop out. Some players have reported that they actually did not get anything. So watch out for that.

The Robot Devil will now lounge on his throne for 4 hours, and then you can fight him again.

Of course, if you have them, you can use a Spell Bomb that prevents the Robot Devil from conjuring minions for three turns. That will give you plenty of time to kick his ascot.

Now you can make some magnet bombs and go fight Gargoyles in Space… As long as you have reached part 5 of the quest, “The Robot Devil You Know”. Which I have not. Post coming.

So what do you think of fighting the Robot Devil for New New York? How far have you gotten in the questline.? Let me know in the comments below.

7 thoughts on “Fighting the Robot Devil”